Wine maker and Viticulturist Teunis Kwak was born in Holland, raised in Canada and finally settled in Australia. He bought the land that was to become Panton Hill Vineyard and Winery in 1973. The land was a bush block with its share of blackberries, no road access, electricity or water.

Teunis began the job of transforming the block almost single-handedly while still working as an Associate Professor in the Earth Science Department of Latrobe University. Although he had no background in building, Teunis did know a good rock when he saw one. Outcropping sandstone from the property formed the major material for his building. Convict mined Grampians sandstone (from the same quarry as parliament house), recycled timbers and Welsh slate (originally ballast in early ships to Australia) are just some of the materials used. The building became a matter of trial and error, research, some common sense and lots of physical perseverance and determination.

Teunis made his first wine when he was 14 years old, out of wild black cherries picked in the Canadian forest. Maybe this was a promise of things to come. The first vines were planted in 1977 with the major part of the crop planted in 1987/88. The rocky, dry slopes with little soil have produced tough vines that yield low crop levels. The grape quality is very high, producing fruity, complex wines that do exceptionally well in the cellar. Biological farming techniques are used.

Panton Hill Winery is not a solo creation, but rather the result of a great partnership between Teunis and his wife Dorothy. She has been closely involved in the wine making, marketing and evolution of the business since its inception. 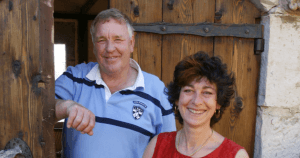 Together our aim is to create consistently high quality wines that are eminently drinkable: meaning, wines that are soft, fruity & complex. We want our guests to feel welcome and well looked after in beautiful surroundings. Providing wine education as much or as little as you like, is also part of our philosophy. Above all, everything done here has to be fun and enjoyable for our customers and for us!

Beautiful and Historic Panton Hill Winery is the perfect place to taste and enjoy an amazing array of quality, aged wines...and a place to share some light and delicious food with friends or family. This stunning destination has been used for, and is available for photo-shoots ranging from family or wedding up to corporate product launches and movies.